On this autumn Saturday morning in 2019, while a hard wind howls off the Fraser River bringing stinging gusts of rain, there’s a festive feel in a lineup of about two dozen foodies, holding onto umbrellas at the edge of a small shopping plaza.

The draw is organically grown produce offered just once a week for sale at the Sweet Digz Farm stand.

“Our goal is to provide customers with healthy produce” says Kareno Hawbolt, who has farmed for more than a decade. With her life and business partner, Kimi Hendess, Hawbolt owns Sweet Digz Farm.

“Technically, we aren’t certified organic, but we plan to start the process,” said Hawbolt.

In the meantime, Hawbolt and Hendess follow organic farming principals and use farming methods that are sustainable and harmonious with the environment and optimize the agro-ecosystem. They don’t use chemicals of any type. 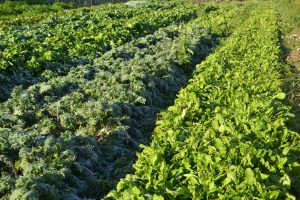 Their four-acre farm is on land leased from a wealthy landowner, a stone’s throw from their farm stand.

Here, in the growing season from March to October, the couple labor in greenhouses and fields up to 16 hours a day, seven days a week.

It’s backbreaking work. The couple doesn’t use leading-edge technology. They don’t own a tractor, produce sorter or cultivator. The costs would wipe out profits.

Instead, the only mechanized equipment are two small gas-powered rototillers and a utility pick-up truck. Most of the work is done by hand.

It’s why customers have an almost religious fervor about supporting them. If Sweet Digz closed, there are just a handful of local farms growing produce, and no-one else delivers.

“Each week from May-September, we harvest vegetables, pack them into boxes, and deliver them to about 90 customers who have prepaid for the season,” says Hawbolt. “They get what’s fresh from the field, which varies each week.”

Friday’s the couple pick and sort vegetables into boxes and bins, which they take to their Saturday farm stand to sell to about 100 regular customers.

Sweet Digz Farm is in the City of Richmond’s South Slough District, one of the few remaining large tracts of agricultural land, 20 miles south of Vancouver.

The district covers six square miles, running east from No. 2 Road to No. 5 Road and south from Steveston Highway to the Fraser River.

But this doesn’t mean it’s farmed. Part of the problem is jurisdictional.

Although 39% of Richmond’s land is in the ALR, and Richmond’s Official Community Plan protects farmland because of a supportive mayor and council, the ALR falls under the provincial government, a higher level of government.

The province has taken farmland for highways and plans to build a controversial $3.5 billion 10-lane bridge on farmland to replace an aging tunnel, a project Richmond Mayor Malcolm Brodie says is unnecessary.

At the same time, the Federal government has bought farmland as a land bank for industrial development for Port Metro Vancouver, angering Mayor Brodie and local farmers.

Some build mansions and lease the rest to tenant farmers like Hawbolt and Hendess, which allows owners to claim farm status and pay less property taxes.

Developers regularly try to get farmland removed from the ALR. While this process is lengthy, if land is removed, owners can make a windfall developing the land into residential subdivisions.

Which leads to another part of the problem: population pressures. In the last 30 years Metro Vancouver’s population has spiked to 2.5 million from 1.5 million.

Richmond has urbanized, adding 40,000 newcomers, bringing its population to 214,500 residents.

As farmland is converted into homes and industry, there are far fewer farms.

Of these, 102 farms are owned by sole proprietors, 62 are family farms and 35 are partnership farms, one of which is Sweet Digz.

Richmond’s farms employed 1,275 workers a decade ago. Now there are 680 workers, according to Statistics Canada.

“Those who are self-employed or work for farmers, may have second jobs, pushed by rising costs and low profits,” said Helmut Pastrick, chief economist for the Canadian credit union system, and a regular Sweet Digz customer.

This is true for Hendess and Hawbolt, who put their university degrees and other skills to use in winter months.

“To supplement farm income, we’ve taught at Kwantlen Polytechnic’s Farm School, and I’ve even worked as a nanny, said Hawbolt. Hendess is a certified carpenter and takes on projects during the winter.

The implications of fewer farms are serious.

Although the province has high capacity farmland, it produces only 45 per cent of its food, according to Dr. Lenore Newman, Canada Research Chair in Food Security and Environment, and a University of the Fraser Valley professor.

“The world market is giving strong signals we are entering a period of dire food shortages,” said Newman.

How long can they hang on?

“Land security is our biggest concern. There’s no guarantee our lease will be renewed or the land won’t be rezoned,” said Hawbolt. “We can’t afford to buy since farmland sells for more $500,000 an acre. We take it day by day.”

In the meantime, Hendess and Hawbolt are philosophically committed to taking care of their fertile farmland, although the odds are stacked against them.

Their customers are grateful for the delicious food. As they become more knowledgeable they’re telling the government, “hands off farmland.”